The Águas de Portugal Group signed a memorandum of understanding with the largest Indian public water sector company, Wapcos, for the joint development of business both in India and in other international markets.
AdP Internacional and the public company Wapcos, which belongs to the Indian Ministry of Water Resources, signed a memorandum of understanding for the joint development of business both in international markets and in India at a ceremony chaired by the Portuguese Minister of the Environment, João Matos Fernandes, and the Ambassador of India to Portugal, Nandini Singla.
On this occasion, the Executive Director of Wapcos, Anupam Mishra, highlighted the synergies existing between the two organisations and referred to the commitment of the Indian authorities to strengthening cooperation with the AdP Group. For AdP Internacional, the signing of this memorandum brings about an important strategic partnership that consolidates the objective of expanding its activities into new geographies, which include India but also Africa and Asia more generally, where similar projects are under study.
Relations between Europe and India have been deeply strengthened in recent months with the particular highlight being the holding of the EU-India summit last October. Among other aspects relevant to the water sector, this summit affirmed the objective of continuing to intensify cooperation to deal with environmental challenges, especially under the auspices of the India-EU Water Partnership, an instrument focused on technological transfers and innovation in the water sector among European and Indian entities. In the wake of this summit but also in October, New Delhi hosted the EU-India Water Forum at which AdP presented its Tagus Estuary Depollution Project. 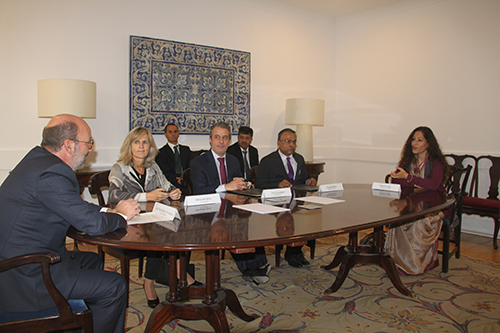