AdP as a signatory of the Global Compact 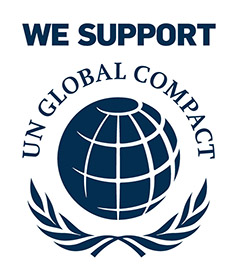 AdP  Águas de Portugal, SGPS, S.A. has been a signatory to the United Nations Global Compact (UNGC) since 2010, participating in what is considered the largest corporate responsibility initiative worldwide, and which currently has more than 100 Portuguese participations, joining business and civil society organizations from around from 162 countries.
In becoming a UNGC participant, AdP took on the commitment for ensuring its business strategies and policies fully respect the ten principles consecrated by the United Nations in this Global Pact that spans Human and Labour Rights, Environmental Protection and Anticorruption Mechanisms.

2 Make sure that they are not complicit in human rights abuses.

4 The elimination of all forms of forced and compulsory labour

5 the effective abolition of child labour

6 the elimination of discrimination in respect of employment and occupation

7 Businesses should support a precautionary approach to environmental challenges

9 Encourage the development and diffusion of environmentally friendly technologies

10 Businesses should work against corruption in all its forms, including extortion and bribery

While participation is totally voluntary, the Global Compact objective is to ensure signatory organisations render these ten principles a daily reality and accepting the obligation to annually notify the United Nations, through a Communication on Progress report, what has been undertaken to achieve these principles.