Valuing the landscape and biodiversity 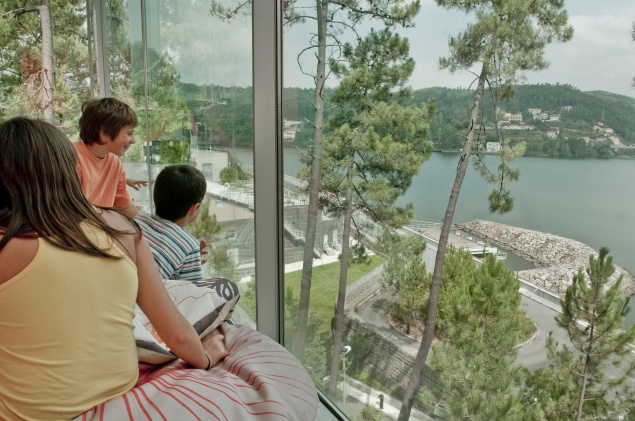 The correct management of the urban water cycle should rest upon a compromise over a balance between the added value brought to the populations and their economic activities and the impacts potentially generated for ecosystem services.

Intimately dependent and interrelated with its cycles of nature and with a fundamental role in depolluting and conserving the aquatic and terrestrial environments, the Águas de Portugal group water supply and wastewater sanitation companies have made a broad and deep contribution towards the protection of nature and biodiversity and as a direct result of its operations or, in the cases requiring such necessary actions, through the implementation of preventive measures minimising and compensating for the impact caused and above all protecting and enhancing the natural and human environments surrounding their infrastructures.

Protecting the landscape and biodiversity in the areas around its infrastructures The activities that constitute the core AdP group business  the supply of water, wastewater sanitation and the treatment and recovery of wastes  act in favour of depolluting and conserving the aquatic and terrestrial environments and contributing towards protecting both nature and the biodiversity prevailing.

In order to strengthen the positive impacts and predict potentially negative impacts resulting from the construction of large scale infrastructures, the AdP Group has taken measures designed to protect the biodiversity in and around construction sites, especially through carrying out environmental impact studies that define the actions minimising and monitoring the environment across all the different life cycle phases of our projects.

The identification of protected areas and the studies characterising the biodiversity prevailing are some of the examples of the best practices that the Group has been adopting, for example enabling the listing of the species present in the licensed area and thereby fostering their protection through raising awareness among the local population about the natural wealth present in the respective region.

For example, within the scope of building the Pinhão Dam, in Trás-os-Montes e Alto Douro, pathways were built to ensure the passage of Pyrenean desmans and otters. This also secured the restoration of some stretches of the water course not reached by the water level and involving the introduction of more indigenous species and improving the fish stocks inhabiting the dam through the introduction of indigenous species characteristics of the Douro river basin.

In the south, within the scope of building the Odelouca Dan in the Algarve, a vast program of measures was enacted in order to minimise, compensate and over-compensate for the environmental impact across the range of the dam and especially restoring and maintaining Iberian Lynx friendly habitats.

The project involved the construction of a National Iberian Lynx Reproduction Centre in the Algarves hill lands with the objective of boosting the population held in captivity and along with projects such as fostering wild rabbit populations and establishing and improving the ecological corridors within the framework of guaranteeing favourable habitat conditions (both for the lynx and for its food chain).

There are also ongoing measures to monitor the fish communities in the Arade estuary and fostering their conservation in conjunction with the rehabilitation of the riverside vegetation and fluvial corridors throughout the Arade hydrographic basin in addition to the natural habitats of large birds of prey, particularly Bonellis eagle, a species considered a conservation priority at the European Union level.

Reducing the impacts associated with the installation of infrastructures The concern over the areas surrounding Group infrastructures also reflects on aspects such as their landscaping, thus considering the visual impact, whether in the rural context or in built environments and alongside needs for deodorisation and noise pollution control measures, constraints with particular stages in construction, among others.

Within this framework, the innovative dimension to the new Alcântara WTP in Lisbon that got built under a green surface spanning around two hectares with this solution enabling a reduction in the landscaping impact caused by this large scale (and constructed in concrete) WTP, within the city limits and next to a natural park and simultaneously benefitting from good levels of thermal and acoustic insulation and scaling back the area of surface impermeable to rainwater and thus helping to offset the risk of localised flooding. This roofing solution furthermore cuts back on global warming through absorbing solar rays that are otherwise reflected and warm the atmospheric air. Simultaneously, the plants photosynthesise CO2 from the air and through this process convert it into oxygen.

Other examples of partially buried or camouflaged infrastructures may be found dotted across the country with a particular incidence on tourism zones and bathing areas, as is the case in the Algarve, with the Vale Faro WTP in Albufeira built under a tennis court and car park; in Alcobaça, the Vale Paredes WTP runs under a football pitch and a beach support area; and, furthermore, the new Guia (liquid phase) WTP in Cascais, where a building located next to the sea and a military fortress in architectural style was retained while complemented by a new building in the ground beneath.

The implementation of deodorising solutions, especially relevant in dealing with wastewaters, takes place not only in purpose built facilities but also in terms of refurbishment works such as those carried out on the Olhalvas WTP in Leiria. Here, the restructuring project included a deodorisation system and thus closing off all places where odours might get emitted and equipped with a ventilation system inputting air into the system that is already deodorised when subsequently released back into the atmosphere.