EIB supports the modernisation of water infrastructure in Portugal

The European Investment Bank (EIB) is providing 420 million to Águas de Portugal (AdP) and its operating subsidiaries to finance investments in water infrastructure in Portugal. This operation is guaranteed by the European Fund for Strategic Investments (EFSI), the core of the Investment Plan for Europe, the so-called Juncker Plan. A first tranche of 220 million has been signed today in Lisbon by EIB Vice-President Román Escolano and the President and CEO of Águas de Portugal, João Nuno Mendes.
This loan will facilitate the improvement of the quality, efficiency and sustainability of water and wastewater services in Portugal, by supporting the construction and renovation of the related infrastructure facilities throughout mainland Portugal. The upgrading of Portuguese water infrastructure will also contribute to fostering economic growth, by creating more than 7,400 jobs during the implementation stage, and will facilitate social and territorial cohesion, since most of the investments will be implemented in convergence regions of Portugal. The project will also bring important and lasting environmental benefits as it will improve the ecological quality of surface and groundwater resources, triggering more rational use of water resources. 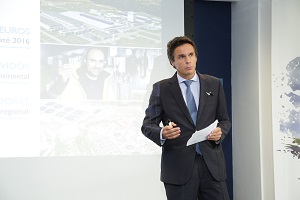 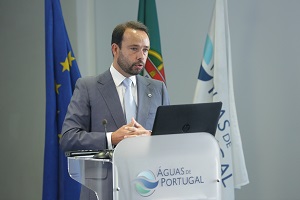 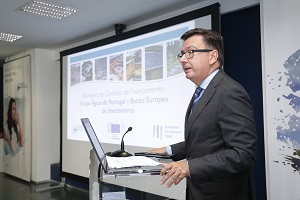 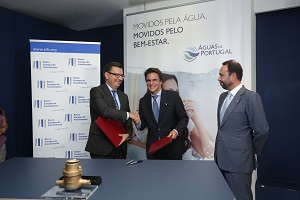 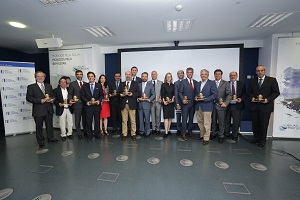 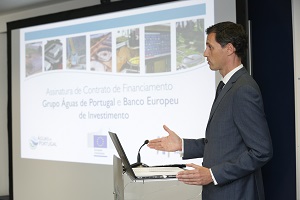 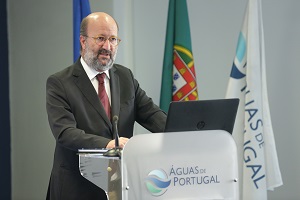 (1) João Nuno Mendes, Chairman of AdP Group | (2) Miguel Martín, CFO of AdP Group
(3) Román Escolano, Vice-President of BEI | (4) Signatures
(5) Group photo with signatories and honoured guests | (6) Álvaro Novo, Secretary of State to the Treasury
(7) João Matos Fernandes,  Environment Minister
Over the next four years, this EIB financing will contribute to carrying out a large investment programme with more than 1,000 improvements in water supply networks that will directly benefit Portuguese citizens by increasing both the quality and the coverage of the service in Portugal. The investments will also increase the volume of wastewater managed with improved standards by facilitating the construction of new collection and treatment plants. Over 8 million people are expected to benefit from improved water services and over 6 million from enhanced wastewater services
The remaining financing of EUR 200 million may be provided through an alternative structure with no recourse to AdP Group. This tranche, whose final terms are still to be defined, could be an innovative monetisation tool for the municipalities which has not been available to date.
Thanks to the support of the Juncker Plan, the EIB is able to provide Águas de Portugal with the required financing on advantageous terms regarding both the duration of the loan and its interest rates. By backing this EIB funding, the Investment Plan for Europe is also contributing to ensuring Portugal´s compliance with key European legislation in the water sector since this EIB financing will help to implement and accelerate the ongoing reform of the water sector under PENSAAR 2020 (Portugals Strategic Plan for Water Supply and Wastewater Sanitation for 2020).
The EIB has a long-standing relationship with the AdP Group dating back to the 1990s and has played an outstanding role in the last two decades in the financing of the water sector in Portugal.
At the signature event in Lisbon, EIB Vice-President Román Escolano said: We are very pleased to support a project that will directly benefit Portuguese citizens by increasing the efficiency and reliability of water services in Portugal. Furthermore, many of the investments implemented thanks to this agreement will be carried out in municipalities in cohesion areas. Moreover, the positive impact of this EIB funding is not only economic and social but also environmental: promoting more efficient use of water resources strongly contributes to climate action, a priority of the EU bank.
European Commissioner for Environment, Maritime Affairs and Fisheries, Karmenu Vella, said: "Thanks to the support of the Juncker Plan, 8 million Portuguese people will benefit from an improved water supply. The project that Águas de Portugal will carry out will result in more efficient use of water resources. I am also very pleased to note that 7,400 jobs will be created thanks to this EU-backed financing."
The President and CEO of Águas de Portugal Group stressed the importance of this financing contract: This funding will enable the implementation of the Infrastructure Investment Plan of AdP, improving the coverage, the service and the resilience of the water supply and wastewater treatment systems in Portugal.